skip to main | skip to sidebar

The 2010 MYA IOM National Championships will be held over the weekend of May 29th - 31st at West Kirby Sailing Club.

Situated on the Wirral Peninsula, it will also be the venue for the 2011 World Championships.

Supported by the MYA, ( Model Yachting Association) MYA Northern District and West Kirby Sailing Club, it will be attended by some of the top skippers from the UK and Europe.

It is open to any skipper who is a member of the MYA or affiliates to it via other organisations.


This site will be the place for all your information relating to this event, before, during and after the event. 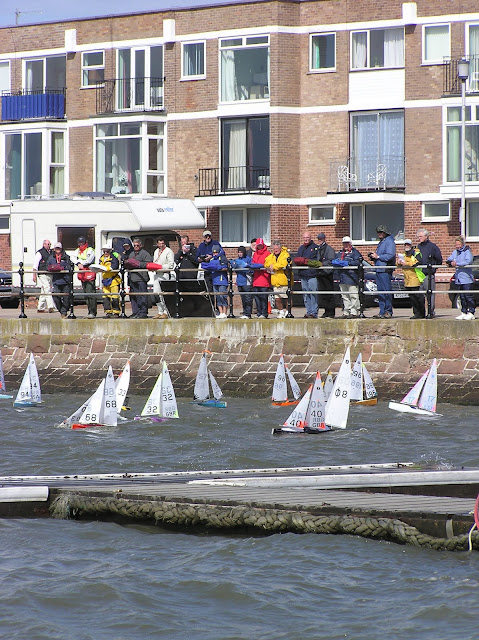 A Competitors View No 3

Greg, Josh and myself embarked on the three day IOM National event on 29th‐31 May held
at West Kirby, a man‐made retained lake adjoining an estuary, with raised embankments,
exposed to the elements from the west.
We were warned that you could expect to use all three rigs, preparation did of course
include the storm rig which we seldom if ever is used on Midland lakes.
After an endless drive up the M6 we phoned ahead and managed to persuade the
measurers that we would just make the end of day deadline for last to be scrutinised, which
made day 1 preparation less hectic.
The course on the three days consisted of two windward buoys, a leeward gate and start
and finish line between. These would be adjusted to suite wind direction variations.
Day 1 Fleets A ‐ E‐ Saturday, there was little in the way of wind so top suite was a certainty.
The seeding races went well and we all sailed consistently throughout the day, Greg
managed to get into the A fleet once after finishing 2nd in the seeding race, Josh fluctuated
between B, C, and D, and I sat in C and B feet's.
Day 2 ‐Fleets A ‐ E Sunday.
As we approached the water to the north of the reservoir promenade it appeared flat and
tame, travelling down the side road waves fetched into a mini swell, maybe they were right,
storm rigs were going to be used in anger.
As the day progressed the swell turned into a choppy waves and a stiff breeze never abated
all day even though local dinghy sailors promised that it would.
Sailing in storm suite is a knack and skill all of its own, going windward through the tack a
double flick of the rudder is required simply to aid the bough to go through head to wind,
going down wind to the gate was hairy, with boats half surfing down the backs of the swell,
desperately trying to find open water so not impede other sailors and half pray that when
you reach the leeward gate that there is space enough to sling shot your boat around the
buoy, nose propelled skyward and head windward again.
Greg, Josh and myself learnt that day how to survive the onslaught of bad weather, look
after the boat and rigs, and staying clear of trouble at the buoys so to carry us over safely
into day three. For the unfortunate few rig failure forced retirement.
Day 3 ‐ Monday, Fleets A‐D was calm and serine with light airs up to 11.00 am.
Top suite was used to good effect with fleet promotion for Greg into B, Josh stayed in Fleet
C with myself for most of the day.
Rig 2 was used for a couple of raced with Greg being the first to persuade the fleets to
change up to top suite again from second for the remainder of the day sailing which played
dividends.
Sailing in such an event with such a high calibre of entry was formidable, to stay in fleet A
was a great achievement in itself with European and World Champions. Fleet B was also
very stiff competition with well respected sailors.
After three days sailing in all conditions it was a true test of sailing ability and durability of
boat preparation.
The end result was Greg finished in top position 32nd, myself 40th
Josh came in 44th position and won the IOM MYA Junior Trophy for the second year
running, previously held by Greg in 2008.
These events are a great way of learning the rules and sailing at the top end of your own
ability against like minded sailors that can part so much information to help you sail more
affectively.
Overall it was a great occasion which was officiated by Peter Stollery who kept the race
impetus flowing.
My only advice to many of the Midland sailors is get those third rigs out of the boxes and
practice in any storm that comes your way.
Congratulations to Midland sailors Tony Edwards, and Darin "surfing up the rankings"
Ballington showed us how to sail with positions of 12th and 34th respectively. 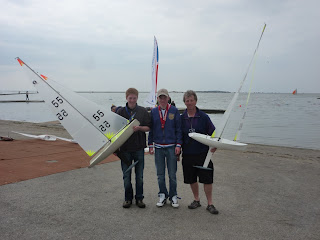 A Competitors View No 2

Report from Holland
All of us (the Dutch guys) found the whole event last year so nice and good organized that we
decided (as a small group of enthusiastic IOM sailers) to do the Uk nationals this year again.
Rob, Joop, Walter and Krijn went by plane and we (Huub and Hanneke) took all the IOM
boats and other stuff in our VW Transporter to the UK. Graham Elliot was so kind to
organize a good Hotel in West Kirby for us.

Thanks for all your effort Graham.

The event had the same armosphere as the one in Eastborne. The whole organization was
very good and also the volunteers did their Job very well.
For me (Huub nr 99) was the event not so successful. Sliding seams, broken goosenecks,
broken topping lifts, broken side stays, unhooked backstays and more funny misery did me
end on place 37. Joop performed pretty well and ended as nr 8.

The first day started with a lot of rain and we kept that for the most of the time. One heat with
the nr 1 rig and than all the races with the nr 2. What a terrible job to get promoted to a higher
group. And it's so easy to fall down. Some guys stayed for ever in the A fleet (I still have a lot to
learn) Others (like me) jumped constantly up and down. It's more sailing when you behave
like that :0).
That's why I created so much technical problems.

What makes you a good IOM sailer. Small details can give you that advantage you need. I
analyzed a lot of trims of the top sailers. There is nu rule to find.
Some like to sail with a lot of twist, others like to sail with everything very tight. And all
performed well.

The second day 20 -24 knots. I love these conditions. It gives a lot of spectacle on the water.
Starts are stressful and you must react very quickly. For me better conditions than begging for
wind.
That was the case on the last day.
No wind-- ore winds from different directions.
To Finish last while you where first by rounding the first mark was no exception I found
out....
The wind became more stable during the day. And we could sail a couple of good heats. Not
to forget the good organized meals. We enjoyed it all. It's nice to speak to people with the same addiction. We certainly come back next year for the
Nationals.

I don't know all the names of the guys yet, but I felt sympathy for the big guy yelling for the
boat numbers from the next fleet to sail. He was standing like a rock with a voice like a bear.
Nice guy. Don't forget the lady with the terrible job to find observers..... Complements for
here perseverance.

But to be honest no one likes to be an observer. But she did a good job. Thanks for that.

And then Peter the man in charge. Wow what a perfect job he did. The Right decisions on the
right moments, never something to guess left. Absolutely perfect!

All the guys thanks for giving me advice and for helping me to trim. Hope to do better next
time.

Hanneke (the photographer, think you all have seen her around) and I enjoyed it, despite my
personal result. We had a wonderful time.

Hope to be there by the worlds. We only have two places, so I do my best.

Hope you enjoy the pictures

Hanneke has started to put her photos of the weekend on Picassa, so for a complete set of her pictures visit here


John Kline also took some photos which can be found here

Greg King has posted some video clips on you tube here
Posted by Ashbyroadeast at 08:21

A competitors view No1

72 boats from 7 countries, 3 days of racing on good long challenging courses, marvelous race management, wonderful hospitality, very different wind conditions, not too much rain, good food, good company, and a 3rd place for me!!! What more can I say?
As competitors we paid £22.50 entry fee and a further £18.50 "meal deal" thats £41.
For our £41 we got:-
At least 16 races each (more if you were promoted)
Buffet lunch on Sat (served by the nice ladies of the WKSC)
BBQ lunch on Sunday.
2 course meal on Sunday night and get together at the sailing club.
BBQ lunch on Monday.
Non stop tea & coffee all weekend.

If you missed it, and you could have been there, you missed a great event.

But all of this begs the following question.

If we can run 72 boats (only 4 less than the number in a Worlds or European champs) in 5 or 4 fleets and feed everyone lunch each day and unlimited tea & coffee and dinner one evening, WHY are we being asked to pay 8 times as much to enter the Europeans??

Apologies for the link being incorrect.

Click here for the correct link to more photos.

We have plenty of images that we are converting ready for the web, but if anyone has photos or video that you would like to share with us please email: sailing@ashbyroadeast.demon.co.uk with the details.

The Birkenhead Club has a link to images by one of their members.
Posted by laser173 at 19:57

How to find us.